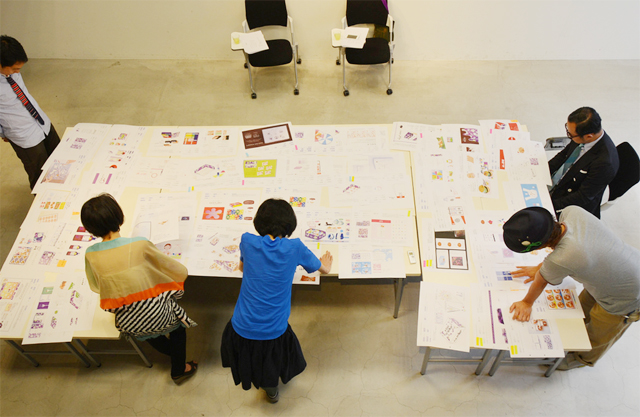 The first screening for “10,000 creators meet PASS THE BATON” took place at the Smiles office on a day in June.
The brief for Project vol.1 was the design for a gift that makes use of “Ohajiki,” which are broken pieces of rice crackers from the famous rice cracker shop Akasaka Kakiyama, and tins of dead stock. The four judges, Mr. Toyama, Mr. Uehara from Kigi, Ms. Watanabe, and Ms Hayashi from Loftwork, examined the 72 entries seriously. There was even an instance during the screening where they actually made and tested the submitted ideas. How the screening unfolded is shown in a photo report. At the end, there are also comments from each of the judges on the panel, so please take a look!

The Judges Look through All Submissions

First, all judges look through all of the submissions. They checked each one very carefully, down to every sentence written on the submission form. 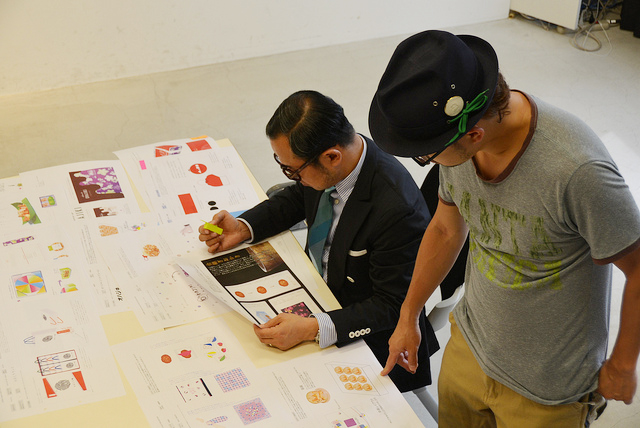 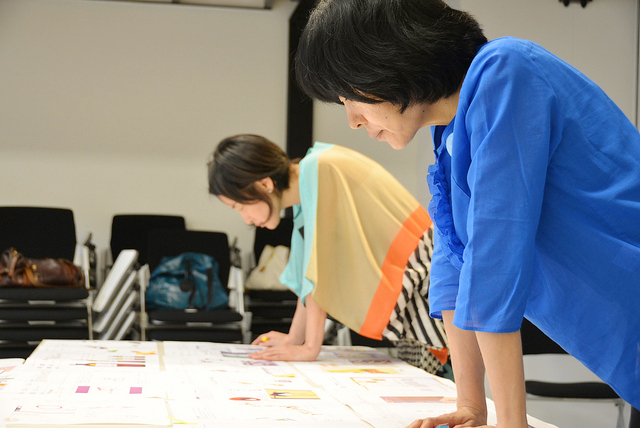 Ms. Watanabe from Kigi (near) and Ms. Hayashi from Loftwork (far).

After the judges looked through all of the entries, the entries were narrowed down and a discussion was held. Opinions were exchanged on several points, such as whether the idea is unique, attractive as a design, and feasible, and whether it can be presented clearly in store. 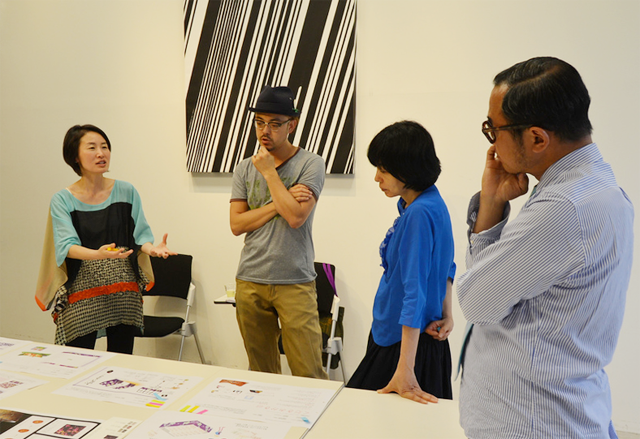 At first, the ideas of processing the rice crackers themselves attracted attention. These included coating the rice crackers in chocolate, and selling the rice cracker as a topping for soups. However, these ideas left the judges with concerns in feasibility, for instance how to cover the product development costs. Furthermore, in order to ensure that the end product can actually be sold successfully in the PASS THE BATON stores, it is necessary to consider factors such as the design and the direction of the in-store promotion schemes.

Next, the topic of conversation moved to the entries that focused on how to make the product interesting using the packaging. The judges saw an idea where the rice crackers represent sumo wrestlers, and they can be made to “fight” each other on top of the packaging box by two players tapping on the box and seeing which one falls off first. The judges decided to try out this game. 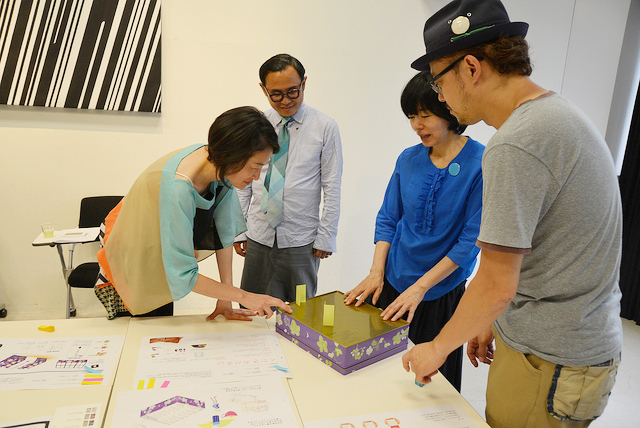 First, cards are placed on the box. But tapping does not make them “fight” very well?

After hearing Mr. Toyama’s comment of “It is more like a dance than a bout of sumo,” Ms. Watanabe drew a picture of a girl on the spot, and made her dance. 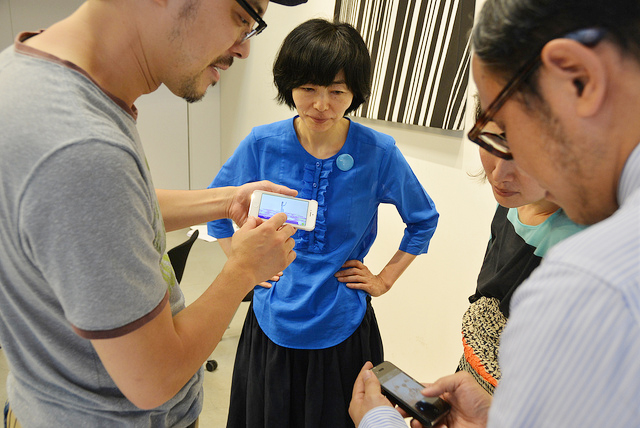 Mr. Uehara takes a picture of the dancing girl on his iPhone. The others are impressed- “Very nice.” “It’s cute.”

In the end, zuca’s suggestion, the “Sumo Rice Crackers,” which added the new dimension of play to the Ohajiki, was highly commended and it was decided that it would be made into a product. 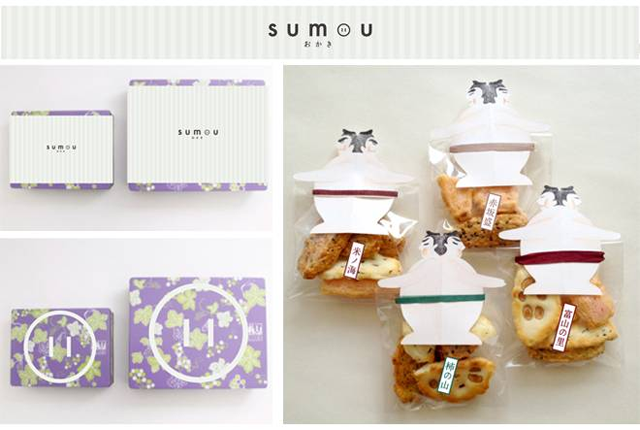 Comments from the Judges

I am pleased that there were many entries. The brief of Project vol.1 had the two elements of designing and coming up with an idea. While there were some strict restrictions on design, there were many entries that tried to win in the idea aspect. However, on the whole, I got the impressions that they could have pushed themselves further with the ideas. In the end, there were two interesting ideas, but I feel that they still have a long way to go until they are actually made into products.

This was the first time I have judged work solely based on documents, and my honest opinion is that it was difficult to decide after just interpreting the work myself. From the judged entries, I felt that they wanted to organize the problems and propose ideas. However, I got the impression that the finished designs were not great overall.

In this time’s task the entries not only had to be superficially aesthetically pleasing, but also had to be linked to the contents. On the whole, I would have liked to see entries with more refined designs. Regarding the entry that was chosen, when we actually made it and tested it, the movement was unexpectedly fun and exciting, and I felt that it was a good idea.

There were other entries with potential apart from the selected one. The selected entry is a suggestion that we did not anticipate. In response to the brief of the project of “producing new value,” it does not just perform in the aspect of the taste of the rice crackers, nor does it just perform in the aspect of design. I hope that it can be made into a product in a good way. 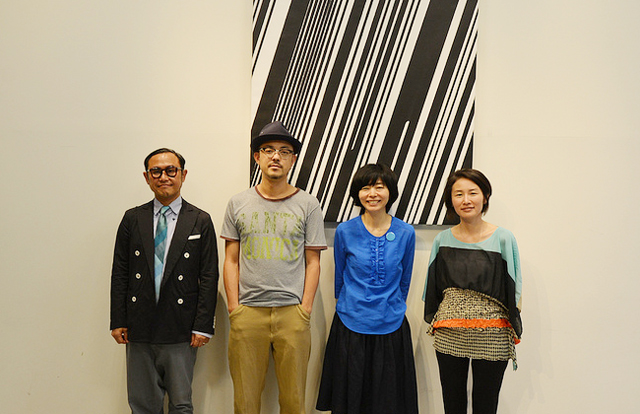 Thank you very much to all of the judges!

Where Do “Ohajiki” Crackers Come From?