The 10,000 Creators Meet PASS THE BATON design project was launched in April. With the current Vol. 4, the project has invited submissions for the final time. 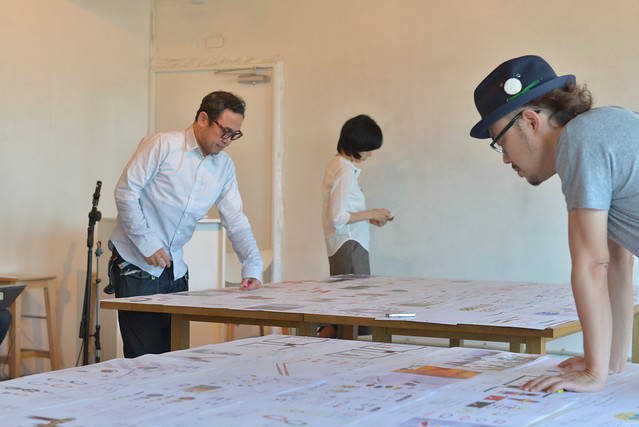 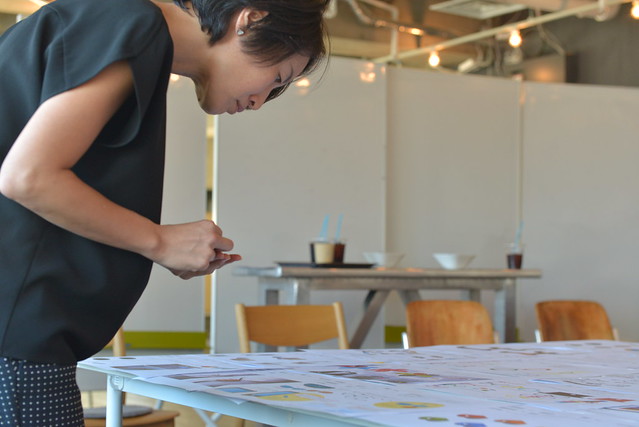 The final theme called for the submission of ideas for new products to be made using leftover pieces of resin (acetate) from the frames of eyeglasses from eyewear brand JINS. The competition drew 91 submissions, the largest number for the entire project. The colorful material, which can be easily cut, pressure bonded, flexed, polished, or otherwise worked, prompted a wide range of submissions, from accessories to stationery, toys, household items, and even an enormous chair.

For this contest, applicants were for the first time provided with the actual leftover eyeglass frame pieces that were the subject of the contest. The judges were looking forward to discovering how the submissions would take advantage of the characteristics and origin of these “leftovers” as well as the texture of the material, and how appealing, practical with regard to commercialization, and realistic they would be. 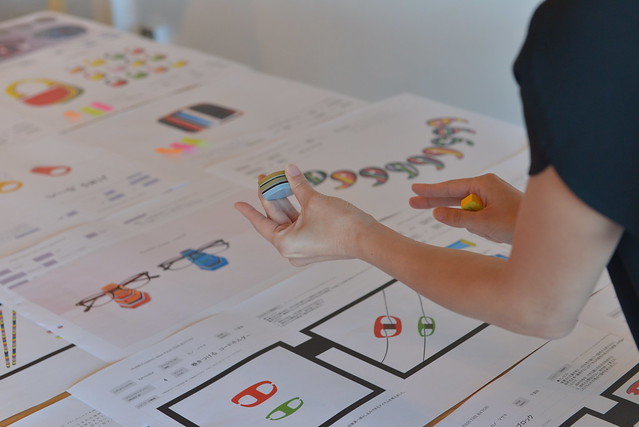 The distance between an appealing idea and reality

This report presents ideas that attracted particular attention during the judging.
The first idea to spark conversation among the judging members, from Koumei Yamashita, imagined the JINS eyeglass frame pieces as shogi pieces, and featured an eye-catchingly bold slogan. 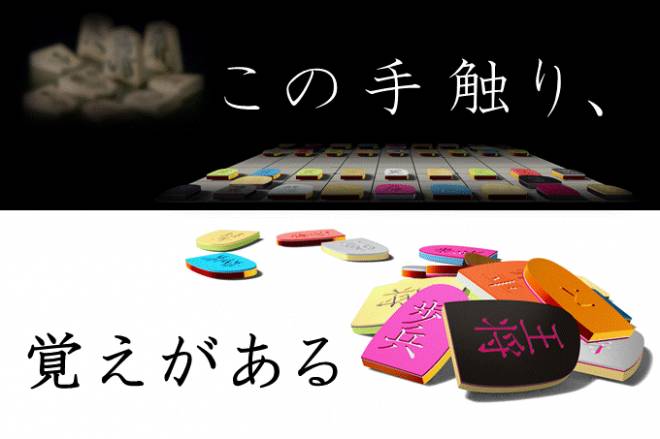 Hayashi: “You remember this feel.” I had to laugh when I read that. Since shogi is an educational toy. It could be interesting.

Watanabe: The idea of showing the color underneath is also nice, isn’t it?

Uehara: I also immediately thought of shogi when I saw the material. The lettering for the design could use a bit more elaborate typography, though.

Toyama: It’s interesting, but I’m not sure how well it would sell as a product…

Hayashi: If it were made-to-order, without maintaining stock, … it might be feasible. Still, it might be difficult to use 4,000,000 resin pieces.

The next submission to attract attention came from Kyoko Fukuda / agura. 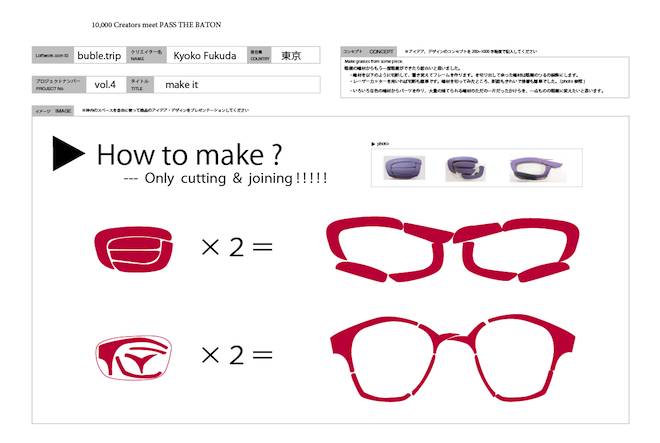 Toyama: What interested me is the idea of separating out these parts and using them to create another new pair of glasses. Creating a frame out of a mixture of parts of different shapes and colors, it’s a plan that would absolutely never come up when developing a product from scratch. If the pieces fit, it could be a one-of-a-kind item.

Hayashi: I’m still concerned about whether it’s feasible. Of course, it’s been calculated out, but I’m not sure whether it would work if it were actually attempted.

Watanabe: It could be a lot of effort to manufacture. 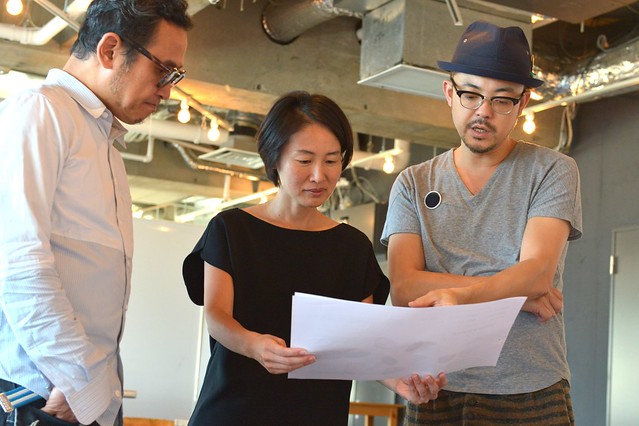 The ultimate goal is commercialization and sales

Although the judging members commented that submissions showed interesting ideas or cute designs, as their deliberation progressed, they often remarked that submissions would be difficult to implement or wondered whether an item would really sell, making it clear that the hurdle to commercialization and sales would be a high one

For example, though an artwork using large quantities of resin pieces in a single item would make an impact, there were concerns based on the precision of the plan about whether it could really be implemented.

The contest also received a large number of ideas for stationery, utility goods, and similar items that were passed over due to concerns including that, as recycled products, the unit cost (regarding the time and manpower for manufacturing) would need to be reduced in order for the product to sell, or that the item was cute but might not actually get much use.

Ultimately, the submission that received the highest evaluation in terms of practicability and product appeal was mano-keisuke’s “Ka-Sa-Ne [Brooch].” 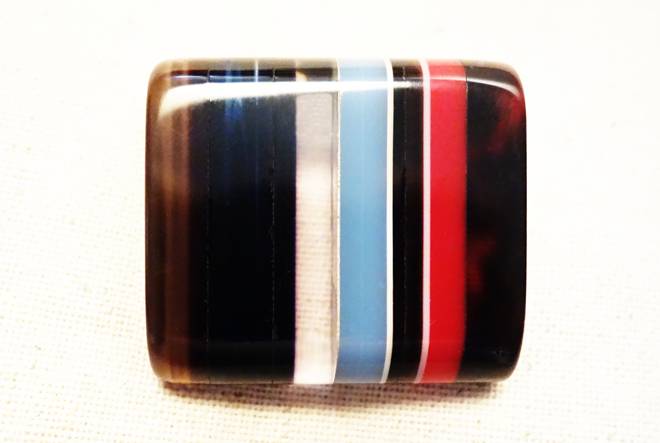 Toyama: Since this was actually made into a prototype, you get a sense of the cute, rounded feel of it.

Watanabe: I may have seen similar designs before elsewhere. Still, it’s really pretty.

Hayashi: Since they made a prototype, it’s pretty convincing. Aside from just a brooch, a variety of earrings or other accessories could be possible. We could even maybe ask them to make an accessory series.

When the judges tried to make one, …

Then, Mr. Uehara and Ms. Watanabe noticed this entry, “Glasses-duck,” from the same mano-keisuke. 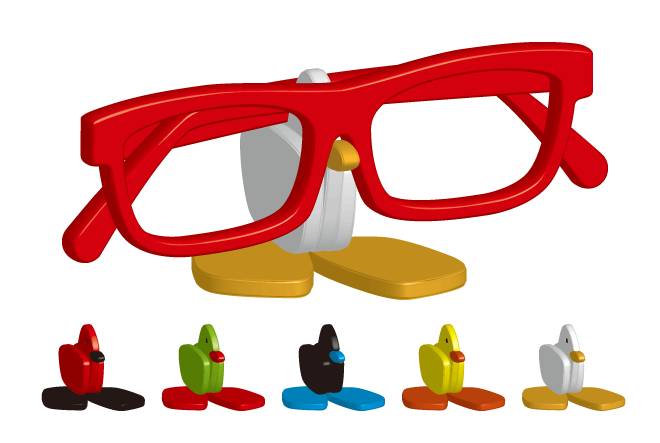 Uehara: This could actually work….

Watanabe: The idea of simply sticking the resin pieces together without changing their original shape could be interesting. I think it’s nice how it has a connection to glasses.

Feeling curious, Uehara and Watanabe both tried to make a prototype then and there. 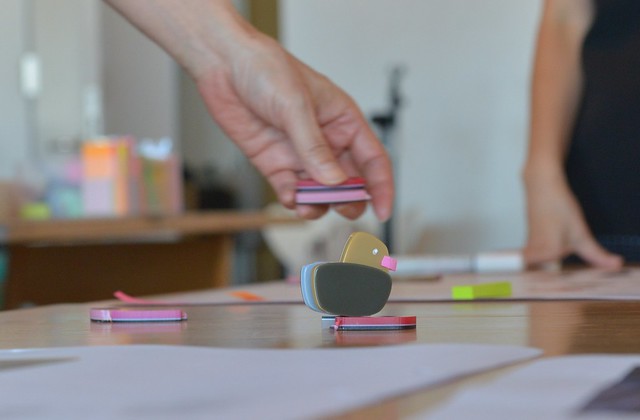 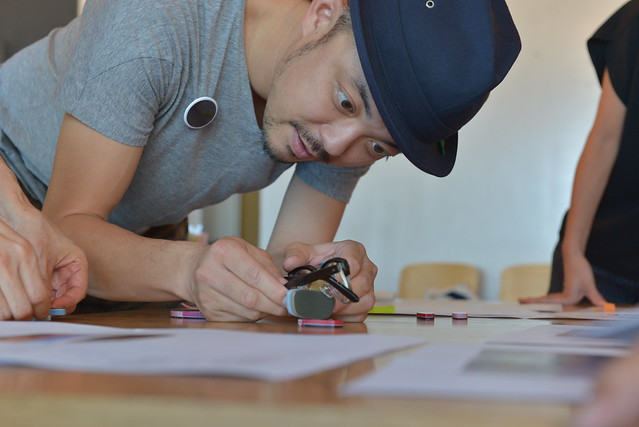 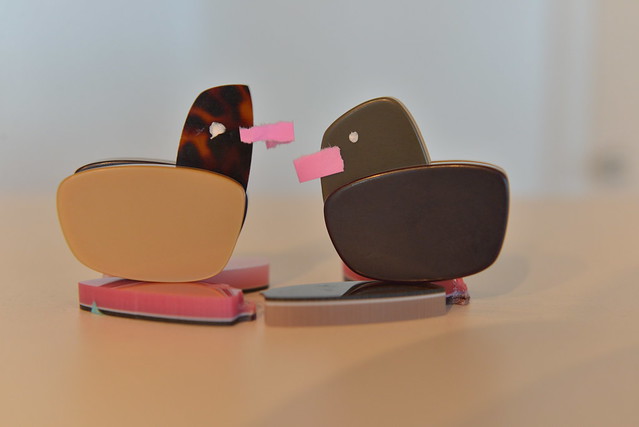 Watanabe: I think it’s even cuter now. We did a pretty good job (laughs).

Hayashi: It’s photogenic, isn’t it? This would look great in a JINS store!

Toyama: It could be funny to have about 300 of these lined up like an exhibition.

And so, it was decided that mano-keisuke’s brooch and glasses stand ideas would proceed to becoming products, along with the possibility of further product development. Below are presented some general comments from the judging members.

The material can be cutely modern and the submissions were generally really elegant, so I had fun being a judge. However, despite my thinking that things would be really amazing this time, there weren’t many “ace in the hole” ideas, so after much consideration, my feeling was that Mr. Mano’s skill really shone in the end.

Since the material in the form of the acetate pieces is appealing in and of itself, if the designs can be finalized for commercialization, the results are sure to be good. It could also be fun to get JINS involved in the production.

In my judging of this contest, I was looking for things that shared some connection with eyeglasses. When I really looked at the winning bird glasses stand idea, it was surprisingly cute. It would be great if this meant a product that could be done together with JINS.

This probably applies to lots of things, but it’s important to have some sort of shared connection that ties together your idea and materials. I’m probably being repetitive, but I felt that it isn’t the case that you can process a material into just anything. I always enjoyed and found meaning in things that took advantage of the shape of the resin pieces or only used a little processing. The bird and brooch ideas certainly fit the bill.

The material being as appealing as it is, I expected to see some really surprising ideas, but was disappointed that there weren’t any truly breakthrough submissions. I still haven’t let go of the question of whether there might be a design that would make use of the 4,000,000 resin pieces that are produced every year and more readily become part of daily life, so I wouldn’t mind another shot at this somehow.

The critical point regarding the winning entries was whether or not they could be implemented the right way. In this contest, I saw many entries with presentation that made me think they would look great on display, but I feel like there were also a lot of entries where I couldn’t overcome doubts regarding their feasibility. Of the entries, I had the most confidence in mano-keisuke’s submissions, since they had actually been assembled, which gave me enthusiasm.